So much has happened, and the situation remains highly fluid. It can be hard to keep up.

Lucky for us, the data experts at the Atlanta Regional Commission are keeping close watch and providing regular updates, including a really handy weekly COVID Tracker. You can find gobs of data and analysis in a recent webinar, but here are some highlights:

State of the Virus

Good news: Total cases in metro Atlanta have fallen sharply in the past few weeks after reaching a peak in August.

In August, the region was recording more than 1,400 confirmed cases a day, a number that’s now dropped to around 500 per day. Last week, the region reported 82 COVID-19 deaths, down 24% from a week earlier.

But – yes, there’s a but – the case numbers appear to be leveling off at around the 500 mark. This is something to keep a close watch on in the coming weeks, especially as school systems in the area consider bringing kids back to the classroom.

Here’s a chart comparing cases in metro Atlanta (green) to other parts of the state.

How COVID is Affecting People’s Behavior

Let’s look at the data. In April, the amount of time spent away from home in the region dropped to between 25% and 30% below January levels. That’s crept up over time and now is between 10% and 15% below pre-pandemic levels.

And teleworking may be with us after the pandemic fades. A survey conducted in August by Georgia Commute Options found that 60% of employees want to telework three or more days per week in the future, compared to 38% in GCO’s April survey. 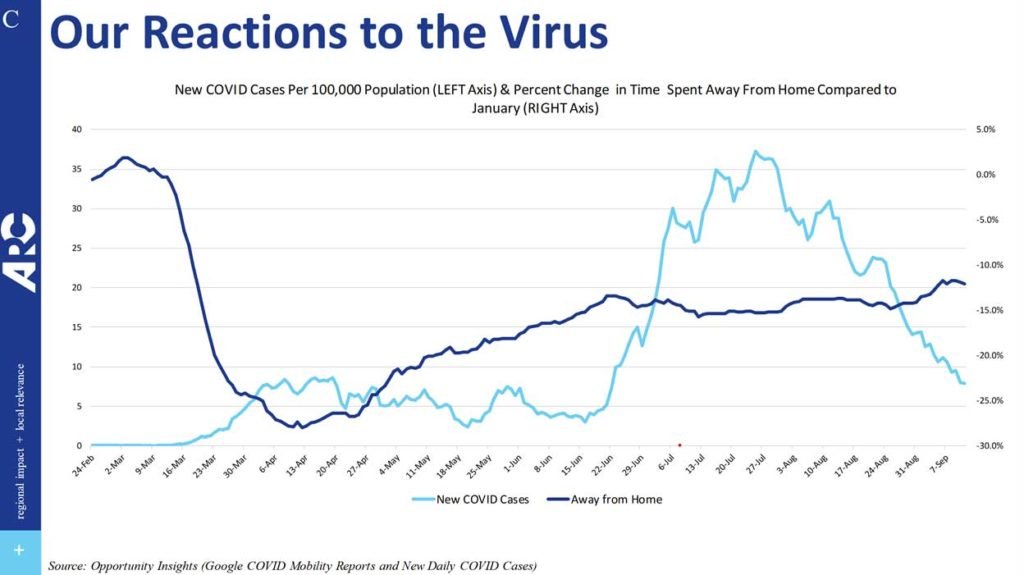 Let’s start with the bottom line: Things are getting better in the Atlanta region. People are hiring again. Layoffs continue to decline but are still occurring, complicating the recovery timeline.

There’s no doubt that the pandemic has caused a blow to the region’s economy. Metro Atlanta has seen employment drop by 5.5%, according to federal labor data (June 2020 compared to June 2019). That’s better than the national job loss average of nearly 9%.

Local sales tax collections are another way of looking at the health of the local economy. While every county in the 10-county region saw a drop in sales tax receipts in April, most have recovered, some sharply.

In July, several counties – Rockdale, Henry, and Cherokee – saw collections 10% or greater compared to a year earlier. The outlier remains Fulton County, which is more dependent on business travel and tourism than the rest of the region

OK, here’s the bad news: Low-wage workers (those making less than $27,000 a year) in the region have been hit the hardest, with employment rates dropping by 18 percent, compared to 13% for middle wage workers and 1% for those earning more than $60,000.

And while evictions dropped off dramatically while a moratorium was in place, they’ve started to tick back up. Local officials are bracing for a potential tsunami of evictions once protections ease in coming months. 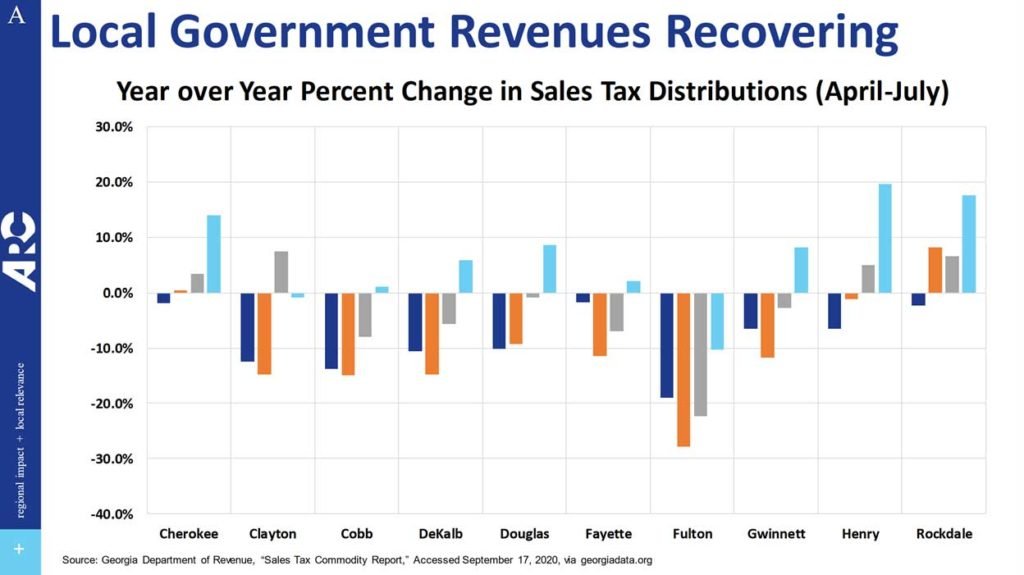