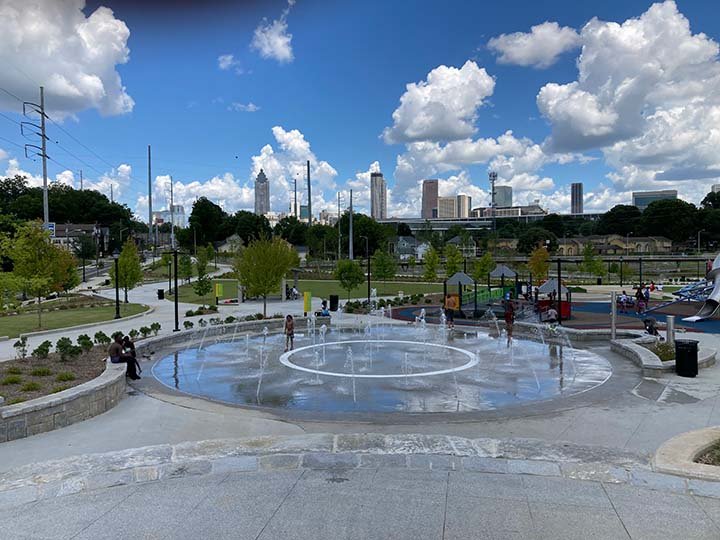 The new Rodney Cook Sr. Park in Atlanta’s Vine City neighborhood is much more than a beautiful place to play and relax.

It also doubles as a watershed management project, offering a solution to one of the area’s most pressing needs: flood control. The centerpiece pond and its surrounding greenspace can store up to 10 million gallons of stormwater runoff. That’s critical for an area that has seen its share of devastating floods.

The 16-acre park, a collaboration between The Trust for Public Land and the City of Atlanta, promises to transform this historic neighborhood located near the Atlanta University Center Consortium and just north of the West End Historic District.

“Rodney Cook Park is located at the low point of Vine City, so all water flows to where the park is,” said George Dusenbury, Georgia state director for The Trust for Public Land. “We have worked with the city to repurpose this land into a park that floods so that the surrounding communities do not.”

The versatile green space offers plenty of recreation amenities, including a rock-climbing structure, a two-acre pond, playgrounds, wide sidewalks, a great lawn, and a natural amphitheater with skyline views.

The park, which opened to the public this summer, also links to the Westside BeltLine Connector.

A hundred years ago, Vine City and English Avenue were vibrant middle-class intown neighborhoods. It was a sought-after address for civil rights leaders in the 1960s. Soon after, the population dwindled. By the early 2000s, it was one of Atlanta’s most distressed communities.

In the aftermath of heavy rains in 2002, many residents, unable to rebuild their homes, sold their plots to the City of Atlanta. The $45 million Rodney Cook Sr. Park replaces those empty lots with the defining features of a historic park that was just two blocks away.

The Rodney Cook Sr. Park captures its original overlapping walkways and atmosphere - with a remarkable playground - while restoring community pride and creating an immensely popular gathering spot for the community. 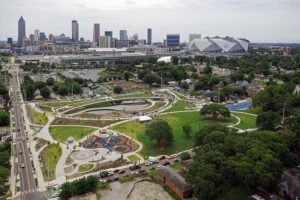 The hope is that the Rodney Cook Sr. Park will build a brighter future for Atlanta’s Westside / Photo courtesy of HDR 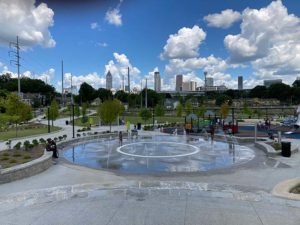 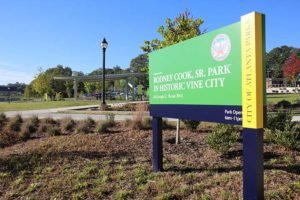 A catalyst for development in Vine City and English Avenue?

The Vine City and English Avenue areas are expected to see dramatic change over the next couple of decades, as the population in the metro region continues to grow, with new development and infill projects popping up around the greenspace.

“The new park will generate community benefits, provide healthy recreational pursuits, and become a hub around which renovation and new construction will take place,” said Robert Bryant of the design firm HDR.

In order to avoid displacement, the nonprofit Westside Future Fund has created a program to help current residents stay in their homes, Dusenbury explained. Longtime homeowners have the option to enroll in the program, which will pay for any tax increases that occur. The Westside Future Fund is also purchasing and renovating old apartment buildings in a way that keeps rents low for longtime renters.

“Cook Park is a transformative project that provides a foundation for residents, as well as community and civic leaders, to build a brighter future for Atlanta’s Westside,” Dusenbury said.

In Decatur, an Affordable Housing Option Is Preserved, and Improved