The data folks at the Atlanta Regional Commission have been up to their elbows in metro Atlanta workforce information lately. Their most-recent analysis shows what industries are growing, which are shrinking, and why it’s a good idea to jump on that nursing program you may have been thinking about.

All of the information is available in this month’s Regional Snapshot, but we’ve highlighted a few takeaways:

Good News: Metro Atlanta has outperformed the nation in employment growth for the past six years. From June 2018 to June 2019, the region’s employment base grew by 1.9% – 6th most among the nation’s 12 largest metro areas. 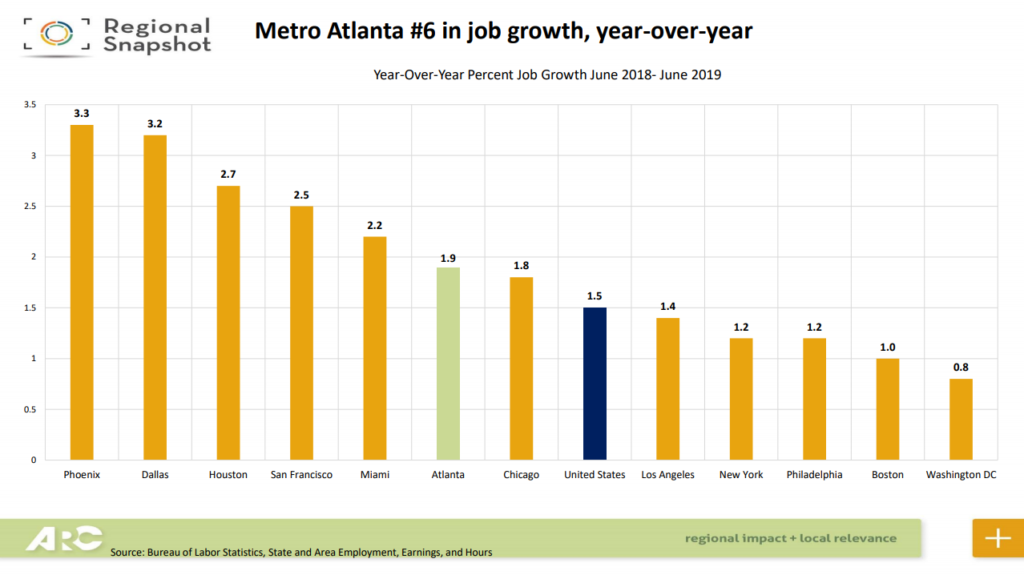 But: Our competitive advantage relative to other large metro areas is slipping a bit. Between 2016 and 2018, Atlanta’s employment growth typically ranked third. And more importantly, not everyone has benefitted from Atlanta’s growth. The largest loss of job shares between 2007 and 2018 have been in low- and middle-income occupations. And the data shows that income mobility is poor: Low-income children who grow up in Atlanta are more likely to remain low-income when compared to the other 25 largest metros. 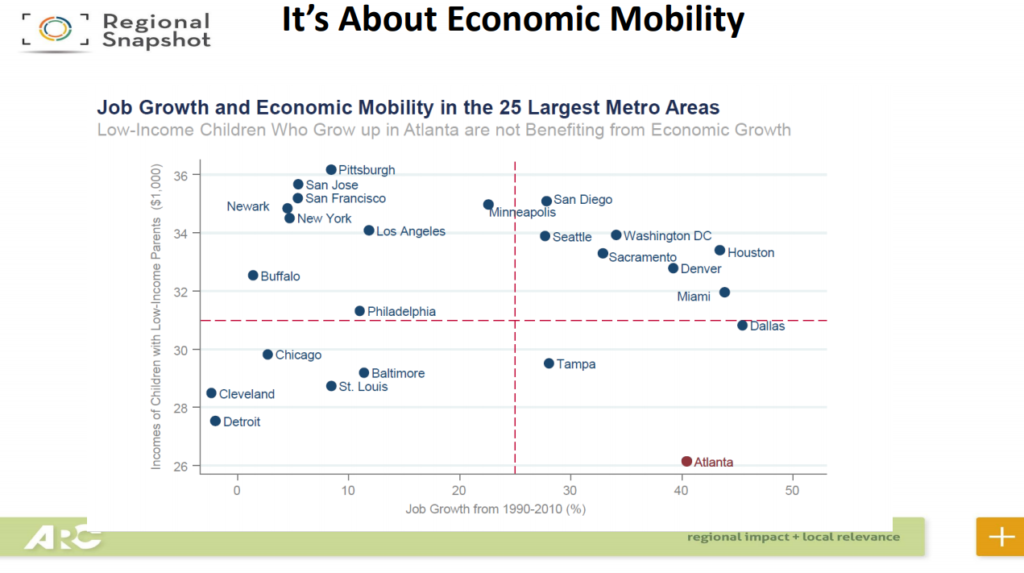 Good News: After years of decline or stagnation that began with the Great Recession in 2008, average wages in the Atlanta region have been trending upward, albeit slightly, in the past few years.

But: Average wages in Atlanta, when adjusted for inflation, still lag the levels of 2000. And since the recession hit, wages in metro Atlanta have trailed the national average.

Jobs and Wages by Industry and Occupation

But: Of the top 10 fastest-growing occupations in metro Atlanta , seven pay below the overall across all industries. Food service employees, retail workers, and cashiers are examples of occupations that pay below average wages.

Good News: Certain occupations are on fire in metro Atlanta. For example, jobs in the healthcare, information technology, and logistics industries are growing at a much faster rate than the national average.

But: There’s a qualifications gap. The data shows that 53% of employers are looking to fill positions with candidates that have a bachelor’s degree or higher, but only 23% of the workforce has that level of education.

Bonus Good News: Dust off those resumes: A new collaborative effort is underway to help fill these high-demand jobs. Check out atlworks.org to find out how the region’s workforce agencies are helping job-seekers and businesses navigate the employment market.

Metro ATL Adds 72,500 People in Past Year. What Does this Growth Mean?

Data Dive: How Metro ATL Gets to Work