You’ve seen the cranes dotting the skyline and the moving vans on the streets. Yep, metro Atlanta’s population boom continues.

The 10-county region added 75,800 people from April 2017 to April 2018, the second-largest annual gain since the Great Recession ended. That’s according to the latest population estimates from the Atlanta Regional Commission.

The Atlanta region is now home to 4.55 million people. For context, or for SEC football lovers, that’s about the same population as Louisiana or Kentucky, and just below that of South Carolina or Alabama. And extending the sports analogy, the 75,800 new metro Atlanta residents would fill the new Mercedes-Benz stadium, to the rafters.

The news that growth remains strong in our region may not be a surprise, but things get interesting when you drill down into the numbers.

Here’s a Q&A that helps shed light on where metro Atlanta is today, and where we’re headed:

In a word, jobs. Metro Atlanta’s economy has been growing as companies expand or relocate to the region. And more jobs mean more people moving to the area.

Metro Atlanta added 41,300 jobs between April 2017 and April 2018, ninth-most nationally. The fastest-growing sectors were construction, education/health services, and transportation and warehousing. Employment growth was 1.5 percent year over year, similar to the national average.

How does this year’s population gain compare to recent history?

It’s the second-most since the economic recovery began in 2010, slightly below the population growth recorded from 2016-2017.

While this growth is impressive, it’s still a far cry from the post-Olympic boom, when the region routinely posted annual population increases of more than 90,000. 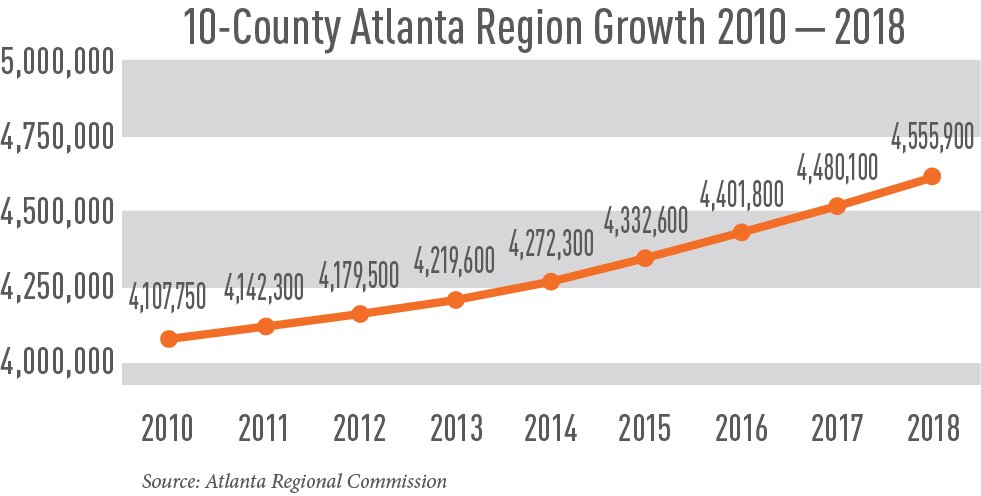 Where is the growth occurring?

Building permits are a good way to identify the hottest pockets of growth. Single-family housing permits were strong in south Cherokee, north Fulton, north Gwinnett, as well as areas inside I-285 north of I-20.

Meanwhile, multifamily housing permits (apartments and condo units) were strongest inside the Perimeter, with some growth along the I-85 corridor in Gwinnett and along Ga. 400 in north Fulton.

The chart below shows building permit data from 2017, which gives a quick way to see where the growth is occurring.

One note: Multi-family units typically have fewer people living in them than single-family homes, so even though the Atlanta had the most permits last year, the city didn’t grow as fast as, say, Gwinnett County.

And here’s a map that shows where population growth has occurred since 2010. The dark green areas have experienced the fastest growth.

How’s the city of Atlanta faring?

The city’s impressive growth continued. Atlanta added 10,100 residents in the past year, the most since the Great Recession.

The growth is being driven by a boom in multifamily housing, as young people, retirees and others seek out walkable communities in places like Midtown and along the Atlanta BeltLine.

OK, I get it, we’re growing. Why do the estimates matter?

The annual population estimates are a great way for local governments and regional planners to see where metro Atlanta is headed and plan for the future.

Population growth impacts our community in so many ways. More people means more people trying to get to work or school or the doctor each day. And growth can put upward pressure on things like housing prices.

Let’s pull out the crystal ball. Will this growth continue?

First, a caveat. Growth is always hard to predict, even a year out. Many variables are at play, most notably the strength of the local economy. Just imagine what would happen to our region’s population if a large business – say, a fast-growing e-retailer? – decides to open up shop here.

That said, there are some indications that growth may be a bit slower in the next few years.

For instance, jobs growth has cooled a bit over the past few years, from an average of about 80,000 a month in 2016 to about 50,000 a month so far in 2018. Also, building permits are down slightly year over year, a reflection of slower jobs growth.