In its late-19th and early-20th century heyday, downtown Jonesboro was a railroad hub, its bustling Central Business District home to popular shops, the town newspaper, and — as historical gossip has it — several popular speakeasies during Prohibition, ensuring ample foot traffic both day and night.

In recent decades, the south metro city has seen many changes. Today, many municipal functions keep this Clayton County seat busy during the day, but it’s fairly quiet at night, functioning as something of a bedroom community.

But Jonesboro has been working to change all that, employing funding from ARC’s Livable Centers Initiative (LCI) to transform itself into a pedestrian-friendly destination complete with restaurants, retail, and housing.

Here are some highlights:

Lee Street Park
The city renovated and expanded a formerly underused greenspace into a 5.7-acre park that connects its downtown commercial district to residential neighborhoods, including some new housing, as well to the nearby GRTA Park-and-Ride and busy Tara Boulevard. With a playground, farmers’ market, walking trail, and two stages that have hosted free concerts drawing thousands of attendees, the park has become a popular downtown destination — and garnered a Development of Excellence Award from ARC in 2016.

Broad Street Plaza
Call it the once-and-future central business district. This spot was once home to bustling businesses and the city fire house but had long fallen into neglect. Now, this block has been reinvigorated, opening this spring as Broad Street Plaza. 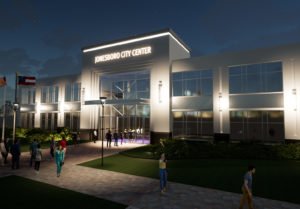 What’s a Lifelong Community? And How Can We Get More of Them?

Podcast: How a Community Transforms, Part 2