Few things shape our region more than how we get to work. Our commuting patterns determine where we live, work, and shop and can even contribute to health problems (tailpipe emissions – cough, cough! – are one of the main contributors to poor air quality).

The Atlanta Regional Commission recently analyzed Census data about commuting patterns in metro Atlanta between 2008 and 2017. It’s a treasure trove of information. Here are some of the highlights:

OK, this is no surprise to anyone who has to sit in rush hour traffic every day. About 77% of us drive alone to work, according to the Census survey, a figure that’s basically been flat since 2008.

While metro Atlanta can certainly stand to improve in this category, our region is doing better than peer regions in the South. For example, the drive-alone percentage stands at about 80%-81% in the Dallas, Houston, Charlotte, Nashville, Orlando and Tampa regions.

The share of people getting to work via public transit has been largely flat, hovering around 3.5%. Still, that equates to more than 100,000 people a day – and that many vehicles kept off the roads.

This figure could be on the rise over the next decade or two, as MARTA expands its transit network in the city of Atlanta, and other parts of the region consider expansions of their own, either through MARTA or the new ATL regional transit authority.

Still, metro Atlanta is well ahead of most of its peers in this area. For example, the transit commuting figure stands at 1.7% in Charlotte, 1.4% in Dallas, and 1.1% in Nashville.

And note that these figures only include job commutes. Of course, many people use transit to get around town for other purposes. Hello, Atlanta United fans!

The fastest-growing commute is having no commute at all, other than moving from the bedroom to the home office. Teleworking is more popular than ever, thanks to modern technology like wi-fi, laptops, and smart phones, and the increasing embrace of this practice by employers.

Maybe it’s telling that I’m writing this from my home office. Thanks, boss!

Bikers and Walkers on the Rise, but Remain Small in Number

Efforts such as building out the Atlanta BeltLine and developing a more robust regional bike-ped network may help more of us get to work on bike or on foot.

What about Ride Hailing Services and Scooters?

Unfortunately, the Census survey doesn’t break out data on Uber and Lyft or the seemingly ubiquitous electric scooters on the streets. But we all know that these new services are changing some of our commuting habits.

If you’re tired of the daily drive to work and looking for other options, check out the Georgia Commute Options program, which provides a range of free services to motivate more people to choose clean commute alternatives 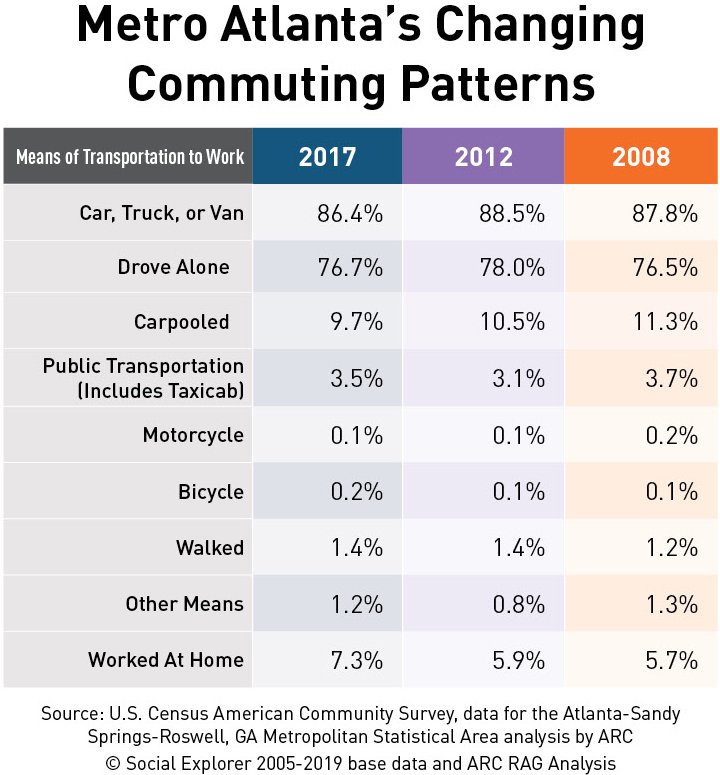 7 Things to Know about the More MARTA Plan