Metro Atlanta’s rental housing market is hot. Make that red-hot. And that’s making it difficult for many working families to find an affordable place to live.

It’s a matter of simple arithmetic: Since 2010, rental costs in the Atlanta region have increased by 48%, but wages are only up 10%.

Given this trend, it’s no surprise that more and more low-income workers are getting priced out of the market. That’s the thrust of a recent report from the Atlanta Regional Commission.

Check out this video, which provides a terrific overview of the report’s main findings:

And here’s a deeper look at what the report had to say about the region’s rental housing affordability:

The numbers tell the story, starkly:

$1,031: The fair market rent for a two-bedroom apartment in the Atlanta region, according to recent national study from the National Low Income Housing Coalition

$3,400: The monthly salary a worker would need to earn to afford that two-bedroom home and avoid spending more than 30% of their income on rent – the widely accepted threshold of affordability

52%: That’s the percentage of workers in metro Atlanta who earn less than $3,400 a month and are struggling to find affordable housing.

Rents in Atlanta region are rising sharply, even compared to other regions

Atlanta has a reputation for being an affordable place to live, something that’s helped fuel our region’s growth. But that’s changing, fast.

Here’s a stunning stat found in the report: Since 2010, rents in metro Atlanta have risen about as fast as in San Francisco, one of the nation’s most expensive regions. What’s more, Atlanta rents are rising faster than places like Dallas, Chicago, and Houston.

‘Cost Burdened’ Renters Can be Found across Metro Atlanta

Households that spend more than 30% of income on housing are known as cost-burdened.

Where do these families live? Pretty much everywhere, from intown Atlanta to the inner suburbs and the outer-ring ‘burbs.

Check out this map. The most concentrated areas, where more than 54% of households are cost-burdened, are shown in brown and orange. 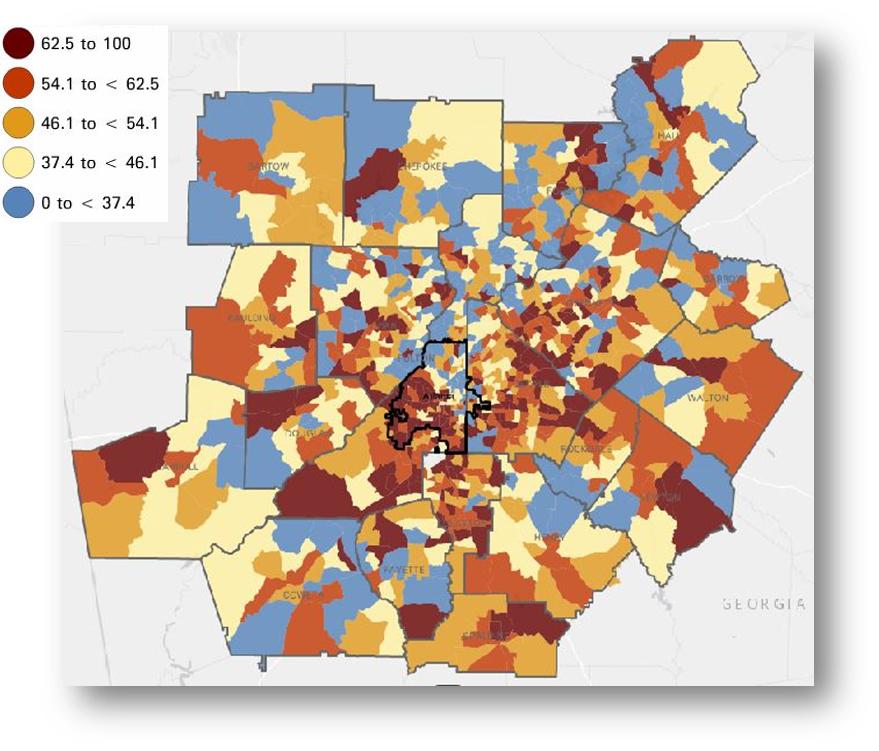 The number of affordable units in the region has been dropping steadily. Between 2011 and 2016 alone, metro Atlanta lost more than 13,000 affordable units – that is, units charging less than $800 in rent.

Looking ahead, some 57,000 units of affordable housing are set to lose their subsidies in the next decade, threatening to take even more affordable units off the market.

Now, for some good news.

There’s still time to act to stave off a crisis – and better yet, metro Atlanta leaders have been taking this issue on, with increasing urgency.

So says Sarah Kirsch, executive director of Urban Land Institute, Atlanta, in an op-ed recently published in the Atlanta Journal-Constitution. Kirsch was among more than 100 Atlanta-area leaders who traveled to San Diego for ARC’s annual LINK trip. Affordable housing was at the top of the agenda during the three-day visit, she wrote:

The housing affordability issue is particularly acute in San Diego. We were told that trainees at the region’s military bases often live across the border in Mexico, where they can find housing that doesn’t bust their budgets.

San Diego provides a cautionary tale. That region’s leaders told us the housing crisis at times feels insurmountable. They also said Atlanta is seven to 10 years behind San Diego – and that we have a chance to take a different path.

Kirsch offered a set of “guiding principles” that ULI Atlanta has drafted to help the region craft a successful housing strategy, and closed on a hopeful note:

We may look back at this year’s LINK trip as a critical moment for metro Atlanta. We heard how important affordable housing is to a community’s success, and we learned that we must act soon or face costly consequences down the road.

I’m confident that metro Atlanta will rise to the challenge. We have the ideas, the skills, and the leadership to make sure that affordable housing is something available to the entire community, not just the few.