About 135 leaders from metro Atlanta visited the Austin, Texas region in early May as part of the 2022 LINK program, where they explored key issues the two communities face, such as housing affordability, traffic congestion, and economic development. 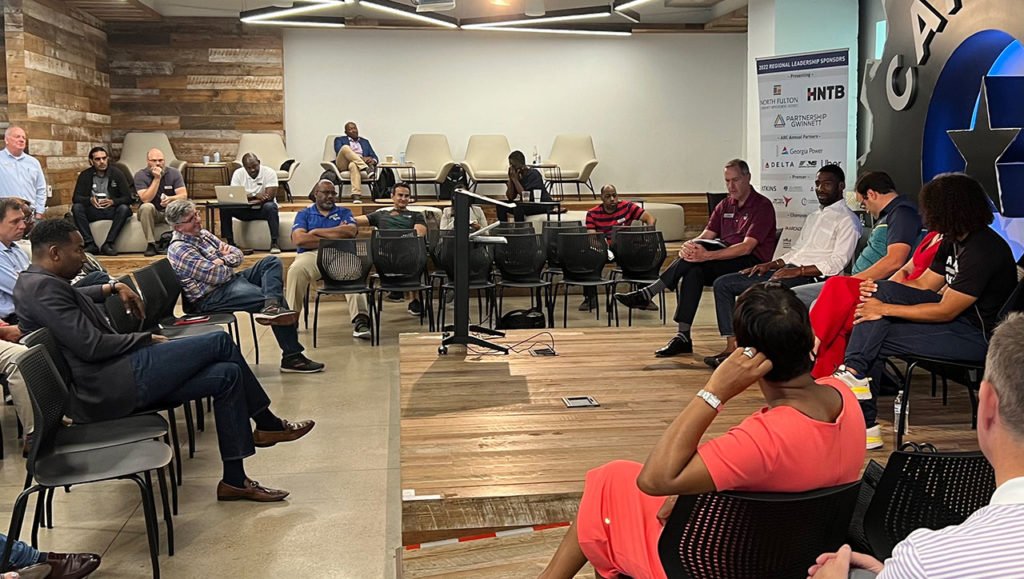 Here are some of the big takeaways from the visit, which included in-depth panel discussions, small group sessions, and field trips to some of Austin’s most innovative organizations:

Think ‘Outside the Box’ to Creatively Address Community Challenges

Perhaps it’s fitting for a region known as a creative hub and IT magnet, but Austin has consistently found innovative solutions to move their region forward. LINK participants heard from a diverse array of Austin leaders who discussed how they are working to bring about meaningful change.

Be intentional: Creating the Future You Want Doesn’t Happen by Accident

In just a few decades, Austin has transformed from a relatively sleepy college town to become the fastest-growing large metro area in the country. More recently, Austin leaders worked to bring a medical school to town, which has sparked a boom in the health sciences sector.

“We get asked all the time how did Austin put this regional economy together? It wasn’t because we were lucky,” said Laura Huffman, CEO, Austin Metro Chamber. “Our economy and its diversity was built very intentionally over a long period of time.”

These efforts are ongoing. During the visit, LINK participants visited a high-tech incubator and heard from some of the entrepreneurs and visionaries who have put Austin on the global map.

Now, Austin leaders are focused on “Keeping Austin Weird” as folks say in the Texas capital, to keep the region’s economic edge.

“Quality of life is what it comes down to. With remote work, you don’t have to live in any particular place to build tech anymore,” said Ethan Monreal-Jackson, founder of Austin-based Newtype Ventures.  “What will attract people to a place is what is provided outside of work. The city that figures that out will win the next 20-30 years.”

Community Support is Key to Success

Austin’s experience makes it clear that the path to success is from then ground up, rather than top down. Regional leaders told LINK participants about key initiatives that succeeded because supporters took the time to talk to residents about what they needed, rather than assuming.