Data is most meaningful when placed in context.

But finding accurate data can be difficult and time-consuming. Where do you start? What sources are reputable? 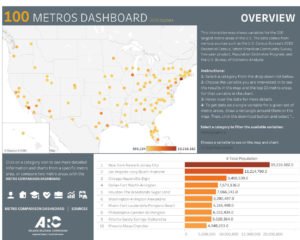 Now, there’s an easy solution. The data experts at the Atlanta Regional Commission and Neighborhood Nexus have developed a user-friendly, interactive tool they call the 100 Metros Dashboard, which provides a wealth of data about the 100 largest metro areas in the U.S.

With a few clicks, you can take a deep dive into a range of issues: housing, education, health, employment, economic development, and commuting. There’s even a handy “comparison” tab that enables users to quickly gauge how two metros stack up on key metrics.

Quick note: The data used to develop the 100 Metros Dashboard is timely, but it’s not in “real time. That’s to say, the data points may not yet capture the impact of the COVID-19 pandemic. Sources include the U.S. Census Bureau, Bureau of Labor Statistics, and the U.S. Bureau of Economic Analysis.

We poked around on the dashboard to see the kinds of insights that are available. Here’s just a taste of what we found:

This just scratches the surface, of course. Take the site for spin and unlock the power of this innovative site.