Attracted by the job opportunities arising from a strong economy, an increasing number of international residents have come to call the Atlanta region home — and a significant portion of that population is made of up individuals of Hispanic/Latino origin. Nearly 49% of the region’s “foreign-born” population hails from North, Central, or South America. 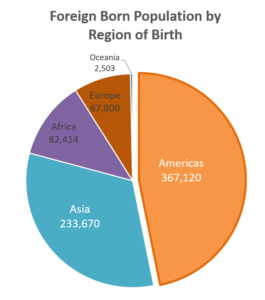 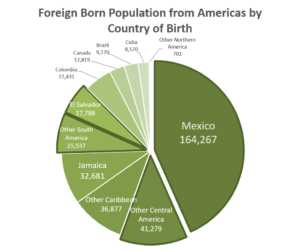 (The metro Atlanta MSA refers to the 29-country region as defined by the U.S. Census.)

In 2015, Hispanics comprised 10.7% of the Atlanta region’s population

Nationally, the metro Atlanta MSA ranks 20th in the size of its Hispanic/Latino population. The highest concentrations of this population are in Gwinnett, Barrow, Hall, Forsyth, North Fulton, and Cobb counties.

These days, most of metro Atlanta’s new Latinos come from elsewhere in the United States

Between 2000-2015, U.S. born Hispanics/Latinos accounted for 69% of the Hispanic/Latino population growth in metro Atlanta. In previous decades, immigration of the foreign born was the primary driver of Hispanic/Latino growth. In fact, percentagewise, we’ve seen a complete reversal from the 1990-2000 period, when 69% of the region’s Latino population growth came from foreign-born immigration.

Georgia has the fastest Latino growth rate in the nation.

Stewart County, in southwestern Georgia, saw the largest percentage increase in the Hispanic-Latino population, experiencing 34% growth between 2013 and 2016. That’s compared to a Hispanic growth rate of 7.5% across the entire state during that time period.

The median age of metro Atlanta Latinos is 26. That’s compared to a median age of 36 overall, and 41 for individuals who identify as White, Non-Hispanic. That’s important for the region’s leaders to keep in mind as they make policy and planning decisions, as different age groups have different needs, concerns, and goals.

The priorities of a growing population
ARC’s Metro Atlanta Speaks Survey takes the pulse of metro Atlanta residents as it helps guide the region’s planning and decision-making.

Here’s how the region’s growing Hispanic/Latino population responded to key questions in 2017:

(The population as a whole rated crime second and public education third.) 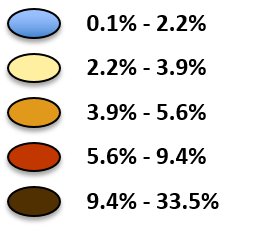 These four maps document the county-by-county growth pattern of the Hispanic/Latino population from 1980 to 2010. In 1980, this population was concentrated in and around the state’s military bases — Fort Benning and Fort Stewart. However, in the 1990s, Hispanics and Latinos began to migrate en masse to places like Dalton and Atlanta.

By 2010, the Hispanic/Latino population made up more than 2% of most of the state’s counties, with many counties more than 5% Hispanic/Latino, and a few approaching 30% or more.  Whitfield County, the global leader in the carpet industry, now has the highest county-level concentration of Hispanics/Latinos in Georgia — 33.5% of the total population.

Find more details about this story, complete with graphs and other visuals over at 33n, our regional data blog which regularly shares research about the metro Atlanta Region.