A better, safer commute could soon be on the way in metro Atlanta, thanks to a significant increase in state and federal transportation funding.

The new funds enable a number of projects in the Atlanta Regional Commission’s long-range transportation plan to be fast-tracked and come online years earlier than they would have otherwise.

These carefully targeted investments include improving highway intersections to allow for better traffic flow and safety and expanding the region’s network of Express lanes, which offer a faster and more reliable commute for those who carpool, ride transit, or pay a toll that rises and falls based on traffic congestion.

The Atlanta Regional Commission is in the process of updating its short-range transportation plan, known as the Transportation Improvement Program, or TIP, to reflect the new funding streams and construction timetables.

A public hearing will take place at 10:30 a.m. on July 13 at the Atlanta Regional Commission. 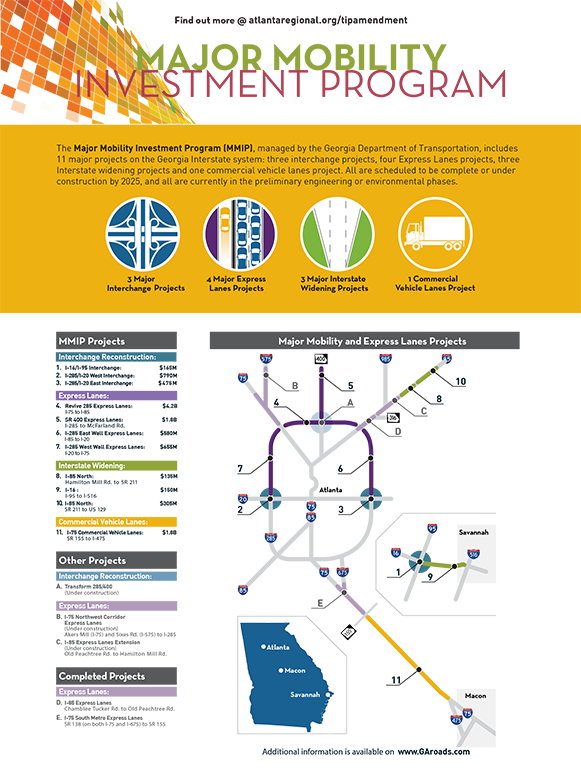 The additional transportation dollars are helping fund the state’s Major Mobility Investment Program, managed by the Georgia Department of Transportation.

This program includes nine projects in metro Atlanta, which are expected to be complete or under construction by 2025:

Driven by a newfound spirit of collaboration

The push to increase transportation funding was led by Georgia Gov. Nathan Deal and the state Legislature. These leaders, recognizing the need to improve mobility in metro Atlanta and across the state, worked to pass the Transportation Funding Act of 2015, which provides $750 million to $1 billion a year in additional funding each year – effectively doubling the state’s transportation budget.

The legislative success can be traced in part to a newfound spirit of collaboration that has been forged among the region’s transportation agencies — GDOT, SRTA/GRTA, MARTA — and ARC. This helped change the climate about transportation investment in metro Atlanta following the failed 2012 referendum.

“This has led to significant investment in our transportation network that will enable us to implement our region’s long-range plan in a much more timely fashion, so we can keep up with growth and remain a thriving, competitive region,” said Doug Hooker, ARC Executive Director. “We are seeing unprecedented support from our governor and state legislature, as well as voters across the region who have approved ballot measures to increase funding for road and transit projects.”

It’s important to note that the Atlanta region can’t build its way out of congestion. Every thriving region wrestles with traffic problems to one extent or another.

Going forward, improving metro Atlanta’s traffic congestion requires a multi-faceted approach. This includes expanding transit options and fostering the development of communities where it’s easy to get around by walking or biking. And alternative commute options, such as carpooling and teleworking, will also play a key role.

Improving the region’s walking, biking and transit options will also help metro Atlanta’s ability attract and retain young professionals and also provide improved mobility for the region’s fast-growing population of older adults, enabling them to remain in their communities as they age.