The ATL gives local governments the ability to establish or expand public transit service in ways that best fit their communities. Expanding transit options will improve the quality of life for residents and ensure the region’s long-term economic competitiveness.

“We are indeed a 21st century state. It’s time we had a 21st century transit system,” Gov. Deal said during the signing ceremony at the state Capitol. “You will look back on this day as an important turning point for our state.”

The legislation also creates new options for transportation funding in the region. Communities may seek voter approval to raise local sales taxes by up to one percent for up to 30 years to pay for construction and operations. Projects funded by these taxes must be included in the regional transit plan, and approved by The ATL board.

The signing ceremony included remarks from several leaders who led the effort to get the legislation passed, including House Speaker David Ralston, State Rep. Kevin Tanner, and Senator Brandon Beach. 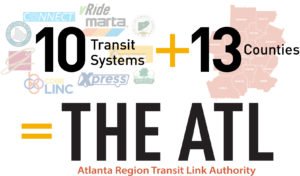 Learn more about The ATL