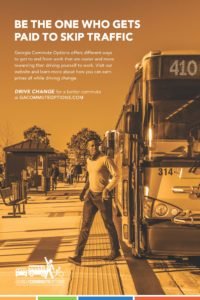 Ever wanted an easier, less stressful commute? How about a few extra bucks in your pocket?

Georgia Commute Options  provides both. Managed by the Atlanta Regional Commission and funded through the Georgia Department of Transportation, Georgia Commute Options is a regional program designed to help commuters make the switch from driving alone to a cleaner commute option such as carpools, vanpools, transit, walking, biking and teleworking and compressed work weeks.

And now, its “Drive Change” campaign is telling more metro Atlantans about the program than ever before.

The new campaign is focused on the overarching goal of the Georgia Commute Options program: reducing congestion and smog emissions by encouraging and incentivizing commuters to consider other commute options besides driving alone; and giving employers and schools tools to help workers and students find clean, reliable commuting options.

“With an estimated 2.5 million people moving to the Atlanta metro area by 2040, it’s paramount to Atlanta’s quality of living that we offer a variety of commute options,” said Malika Reed Wilkins, Executive Director of Georgia Commute Options. “The Drive Change campaign will serve as a great sticking point to make commuters and employers aware of existing initiatives and incentives, and we’ll also be launching new programs, all with the goal of driving real and meaningful change into daily commuting.” 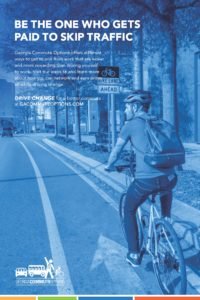 The research also showed that a majority of commuters are open to using commute alternatives in exchange for cash incentives. As part of the Drive Change program, Georgia Commute Options is promoting its existing cash incentives for commuters who opt to try a new option: