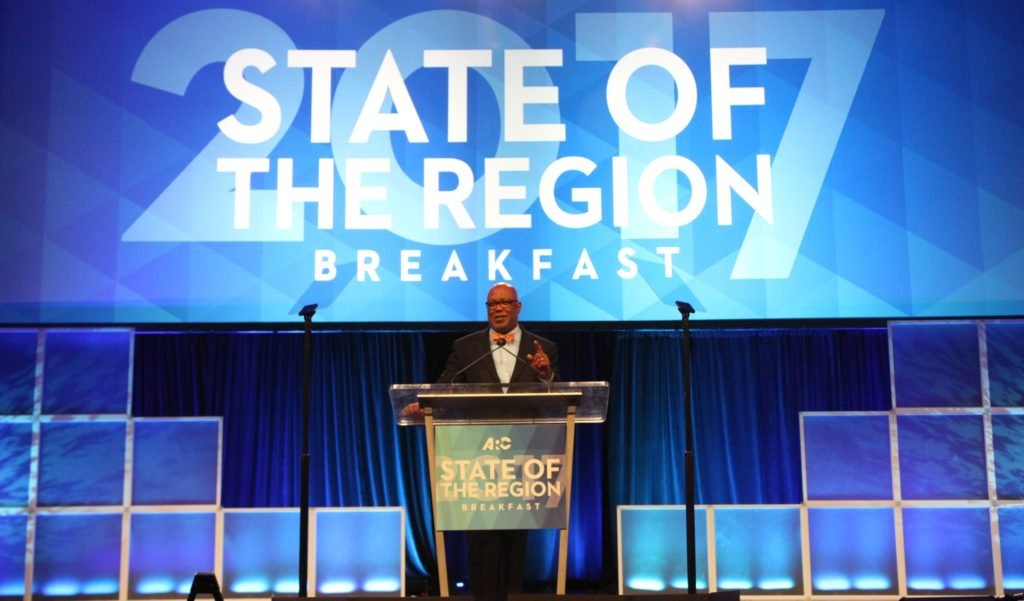 More than 1,300 civic, business, elected, and nonprofit leaders from across the Atlanta region came together at the Atlanta Regional Commission’s State of the Region Breakfast on Nov. 3 to explore how collaboration has the power to improve quality of life in metro Atlanta.

ARC executive director Doug Hooker presented the State of the Region message, reflecting on metro Atlanta’s tremendous recent growth as well as the region’s significant disparities. He urged the audience to work together to help bridge the gaps and continue the region’s upward trajectory.

The Power of Collaboration

Hooker asked those in attendance to get involved by hosting or attending an ARC Civic Dinner. ARC has teamed with Atlanta-based Civic Dinners to provide metro Atlanta residents the opportunity to sit down together and break bread while having focused conversations about local issues that matter.

Anyone can host a civic dinner. ARC provides a simple host guide with details on how to do it. The host chooses one of three topics to explore: mobility, livability, or prosperity, then invites six to 10 people to dine together. The more diverse the group, the better!

The input will help ARC and its regional partners gain a better understanding of what matters to metro Atlanta residents as ARC begins the work of updating The Atlanta Region’s Plan, the blueprint for metro Atlanta’s future.

Learn more about Civic Dinners and how to get involved.

ARC released the results of the fifth Metro Atlanta Speaks public opinion survey during the event, providing key insights into the region’s views on a range of quality of life issues. Among the key findings:

ARC also launched its new speaker series—What’s Next ATL—at the State of the Region Breakfast. These are short, engaging talks from dynamic speakers, each aligning with the main goals of the Atlanta Region’s plan:  providing world-class infrastructure, building a competitive economy, and fostering healthy, livable communities.

The agency presented the 19th annual Developments of Excellence Awards, in recognition of places in metro Atlanta that make our region a better place. The top Development of Excellence Award went to Parsons Alley, a mixed-used development framing a public plaza in downtown Duluth that brings a carefully-planned community vision to life.

Other winners were: Avalon in Alpharetta, The Battery Atlanta/SunTrust Park in Cobb County, Manor at Broad Street in Fairburn, and Atlanta University Center in Atlanta.

The fourth annual Harry West Visionary Leadership Award went to Alicia Philipp, a collaborative leader in philanthropy who has led The Community Foundation for four decades.

Philipp has worked tirelessly to improve the quality of life in our region, and her collaborative spirit has fueled many regional success stories. Philipp’s gift is an innate ability to identify a problem and then assemble the right people and the financial resources to address it.

Under her care, the Foundation’s assets have grown from $7 million in 1977 to nearly $1 billion today. Her work has touched thousands of lives through nonprofits in 23 counties.

Because of her leadership and compassion, the Community Foundation now facilitates more planned gifts than any other locally based nonprofit in the Southeast. In terms of grant dollars allocated, they are second only to the Woodruff Foundation. 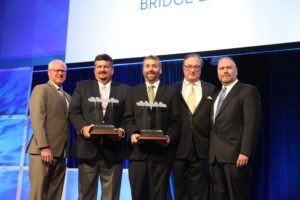 This year, ARC presented a new award, the Unsung Hero Award, recognizing notable work behind the scenes that makes a difference. The inaugural award went to Jeremy Daniel and Mike Garner, Bridge Liaison Engineers with the Georgia Department of Transportation, whose leadership made possible the exceptionally fast reconstruction of I-85 following the March 30 bridge collapse.

To get the job done, Mike and Jeremy drew on their decades of experience, their strong leadership skills, and their tireless work ethic. They were on call 24-7 from the moment this unprecedented project begun. Incredibly, it was completed five weeks early.