The 10-county Atlanta region added 75,800 new residents between April 2017 and April 2018, according to a report released today by the Atlanta Regional Commission.

Jobs growth fueled the region’s population boom. The 29-county Metropolitan Statistical Area added more than 41,000 jobs between April 2017 and April 2018, the ninth-most in the nation during that time.

“People are moving to metro Atlanta because of our strong, diverse economy and our great quality of life,” said Mike Carnathan, manager of ARC’s Research & Analytics Group. “We’re seeing growth across metro Atlanta.”

The fastest growth rates occurred in suburban Cherokee and Henry counties. The city of Atlanta continued its recent growth spurt, adding 10,100 people amid an ongoing boom in apartment and condo construction.

Long-term trends show that the outer suburbs have led the region’s growth in recent years. Cherokee County, on the far north side, and Henry County, on the south side, grew the fastest at 19% and 15% respectively, between 2010 and 2018.

Growth has also been strong in the region’s core, including the city of Atlanta and DeKalb County. The city of Atlanta, which lost population between 1970 and 2000, is growing again amid a boom in multifamily housing. The city added 10,100 residents in the past year, compared to 9,700 the year before, and has grown by 9% since 2010.

“ARC’s annual population estimates are a great tool to help local governments plan for the future and focus the region’s attention on key issues critical to our quality of life, like housing affordability and transportation,” said Kerry Armstrong, ARC Board Chair.

ARC’s population estimates cover the 10-county region and city of Atlanta. The agency does not develop estimates for any other city in the region. 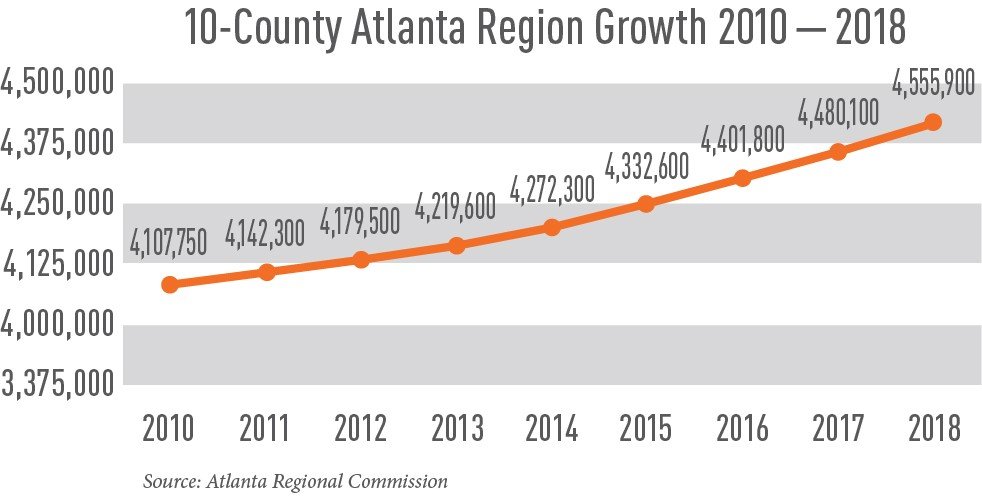 Chart: Population growth since 2010 by jurisdiction

ARC’s population estimates for major jurisdictions are developed using a combination of data sources including building permit data, a demographic accounting equation generated by Carl Vinson Institute of the University of Georgia, school enrollment trends, occupancy rates and more. The base for each successive year’s estimates is the previous year’s estimate, with the starting point for the decade’s intercensal estimates the decennial Census count.

Note: ARC provides population estimates for the 10-county region and city of Atlanta. The agency does not develop estimates for any other city in the region.