(ATLANTA, August 11, 2016) – The 10-county Atlanta region added 69,200 new residents between April 2015 and April 2016, according to the latest annual population estimates from the Atlanta Regional Commission.

The population increase is being fueled by strong employment growth. The 29-county Atlanta Metropolitan Statistical Area (MSA) region added nearly 77,000 jobs between May 2015 and May 2016, the third-highest total among the largest metros in the nation.

The City of Atlanta, fueled by a surge in multi-family housing units, added 7,900 new residents in the past year, compared to 4,800 last year.

“These latest ARC population estimates show that the Atlanta region is resilient and continues to be a place of opportunity and a magnet for people seeking a high quality of life,” said Kerry Armstrong, ARC board chair. 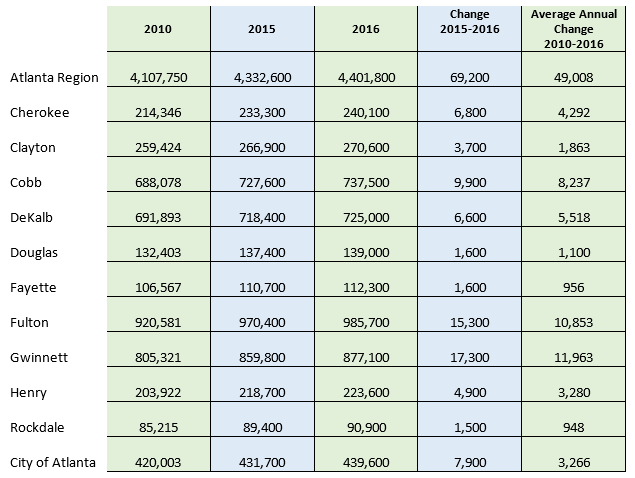 Under state law, ARC is required to estimate the population for the 10 ARC counties and the City of Atlanta each year for the purpose of collecting dues from its member jurisdictions. These population estimates are unofficial until adopted by the ARC Board at its monthly meeting on August 24.

ARC’s population estimates for major jurisdictions are developed using a combination of data sources including building permit data, a demographic accounting equation generated by Carl Vinson Institute of the University of Georgia, school enrollment trends, occupancy rates and more. The base for each successive year’s estimates is the previous year’s estimate, with the starting point for the decade’s intracensal estimates the decennial Census count.