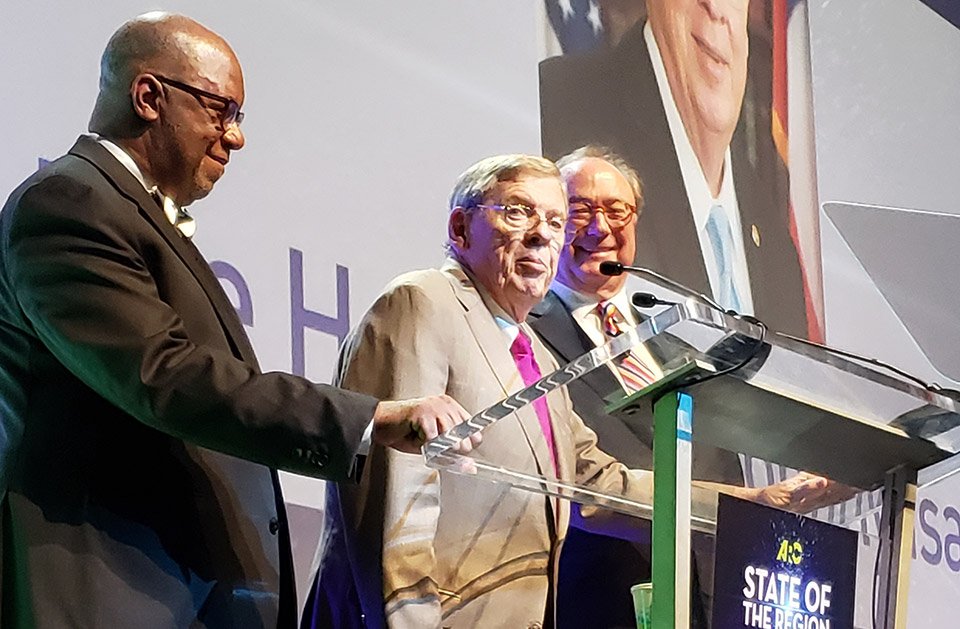 The Atlanta Regional Commission (ARC) today honored U.S. Sen. Johnny Isakson for a lifetime of public service and his lasting impact on the Atlanta region. The recognition took place during the agency’s State of the Region breakfast.

Sen. Isakson recently announced he will be retiring at the end of the year after a distinguished political career that spanned five decades, taking him from the state House to the U.S. Senate.

He also played a key role in helping shape the Atlanta region, serving as a member of the ARC Board from 1997-1999.

“He challenged local and regional leaders to work more closely with the business community, and he gave us sound advice to better involve residents in our planning work,” said ARC Board Chairman Kerry Armstrong. “His vision and leadership have left our region, our state, and our nation a much better place.”

Sen. Isakson entered political life in 1974, serving in both the state House and Senate. In 1997, Gov. Zell Miller appointed him to lead the Georgia Board of Education as chairman, before the Senator turned his attention to serving the people of Georgia in the nation’s capital.

Sen. Isakson holds the distinction of being the only Georgian ever to have been elected to the state House, state Senate, U.S. House, and U.S. Senate. In addition, in 2016 he became the first Georgia Republican ever to be elected to a third term in the U.S. Senate.

“From the very beginning, the Atlanta Regional Commission has had leaders who have guided the community through challenging times and made significant strides through a uniquely successful regional approach,” said Isakson. “Thanks to the ARC’s efforts to find ways to bring people together, the successes we’ve achieved are too numerous to mention. I’ve been honored to do my part locally, in the state and on the federal level to support metro Atlanta and the state of Georgia, and I’m grateful to be recognized as one of many leaders who have helped this region thrive. We are better together.”

ARC is dedicating an orchard in Sen. Isakson’s honor. The orchard is being planted as part of the Atlanta Local Food Initiative’s Orchard Project, which aims to feed, teach, and inspire schools and communities in the region.

“This is a fitting tribute given Sen. Isakson’s extraordinary efforts in addressing global hunger,” Armstrong said.