The ARC Board today elected a new slate of at-large citizen members to join the board for terms beginning on January 1, 2022.

The elections are required following the adoption of the updated at-large district boundary map by members of the Georgia Legislature whose districts are wholly or in part of the ARC’s 11-county area. The boundaries are revisited every 10 years, after the release of the U.S. Census population totals.

The citizen members elected today are:

The board will vote to fill the vacant seats after candidates are nominated.

“These citizen members bring a wealth of diverse perspectives to the regional planning table and provide the insights and expertise we need to move the region forward,” said ARC Board Chairman Kerry Armstrong.

Citizen members are nominated by elected officials, and they must be a resident of the district he/she represents, cannot hold elective or appointed public office, or be an employee of any political jurisdiction in the Atlanta region.

ARC is governed by a 41-member board that consists of: 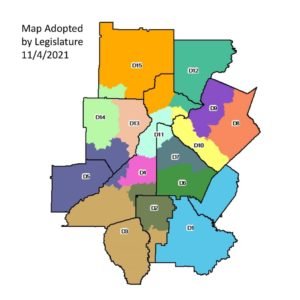