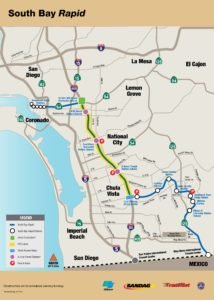 On the 2001 LINK trip to San Diego, participants learned about plans to deploy Bus Rapid Transit in areas where rail might be too expensive. San Diego leaders were in the early phases of creating BRT corridors along the I-15 Express Lanes (HOV lanes), and the South Bay area, connecting communities to the south with the Otay Mesa border crossing and to transit and employment hubs downtown and in the north part of the region.

On the 2018 LINK trip to the San Diego region, participants will see BRT in action. The I-15 and Mid City lines are active and include BRT infrastructure such as dedicated access ramps for highway access, and center-line stations where stations are located at grade between highway travel lanes.

The first phase of the South Bay BRT project will be operational in late 2018. Participants will see the completed infrastructure in Chula Vista, which includes dedicated lanes and stations. The South Bay project will connect the Otay Mesa border crossing to the rest of the region’s transit network.

The region’s light rail system already connects to the other main border crossing at San Ysidro, where it sees its highest ridership volume. 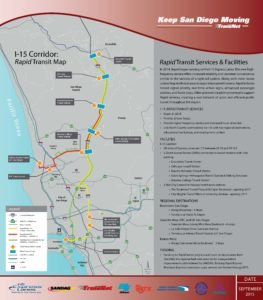 In metro Atlanta, Gwinnett County, Fulton County, and the City of Atlanta are looking to incorporate BRT into transit expansion plans.