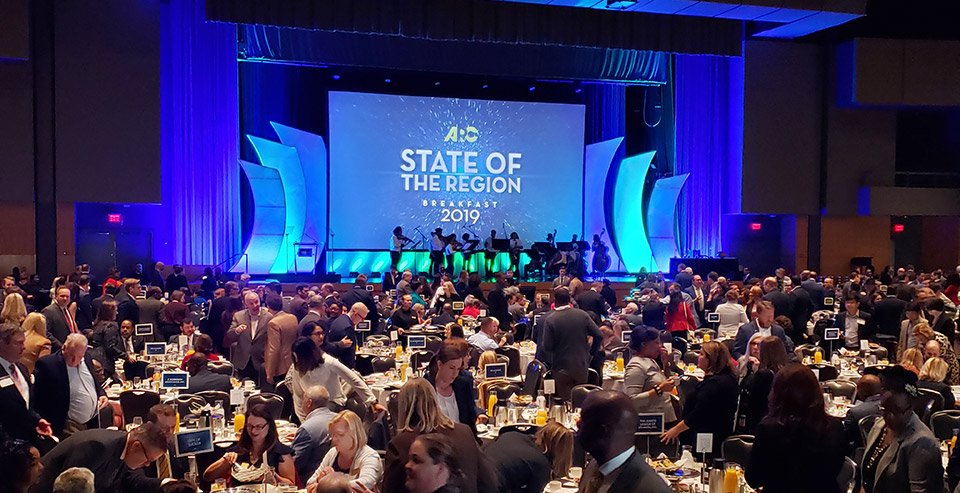 More than 1,500 leaders from across metro Atlanta explored the region’s opportunities and challenges at the Atlanta Regional Commission’s 2019 State of the Region Breakfast on Nov. 8.

ARC Executive Director Doug Hooker presented the State of the Region message, reflecting on metro Atlanta’s strong growth while emphasizing the need for the region to work together on key issues, from workforce development to affordable housing.

“All of us realize that no one person nor one organization alone can fix these challenges,” he said. “We have to work collectively, collaboratively, committedly…one conversation at a time, one constructive act at a time.”

State of the Region Address

The event included a celebration of the Atlanta region’s “Vision 2020” planning process that took place in the early 1990s. That project looked out to the year 2020 and laid the foundation for the growth and prosperity the region has experienced in the years since.

Hooker also announced the launch of the Metro Atlanta Housing Strategy, which is designed to help local governments and communities better understand and address their housing challenges.

“Today, about one-third of our region’s households are cost burdened, spending more than 30 percent of their incomes on housing,” Hooker said. “Our goal is to enable communities to share tactics and lessons with one another in order to help foster a more balanced mix of housing options, reflective of each community’s specific housing needs.”

Sen. Johnny Isakson Recognized for a Lifetime of Public Service 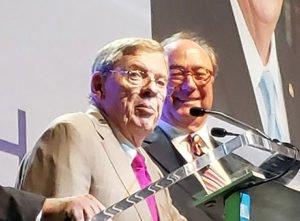 ARC honored U.S. Senator Johnny Isakson for a lifetime of public service to the Atlanta region, the state of Georgia, and the country. He plans to retire at the end of the year after a distinguished career.

Sen. Isakson entered politics in 1974 and served for 17 years in both the state House and Senate. In 1997, then-Governor Zell Miller appointed him to lead of the Georgia Board of Education as chairman.

Sen. Isakson then turned his attention to representing the people of Georgia at the nation’s capital. He holds the distinction of being the only Georgian ever to have been elected to the state House, state Senate, U.S. House, and U.S. Senate. In addition, in 2016 he became the first Georgia Republican ever to be elected to a third term in the U.S. Senate.

At the regional level, Sen. Isakson served on the ARC Board, where he challenged local and regional governments to work more closely with the business community and encouraged the agency to better involve residents in its planning work.

To commemorate Sen. Isakson’s lifetime of public service, ARC will dedicate an orchard to him through The Orchard Project, a program that plants edible school gardens and community orchards that feed, teach, and inspire.

ARC also released the results from the 2019 Metro Atlanta Speaks public opinion survey, providing key insights into the region’s views on a range of quality of life issues.

New questions on this year’s survey revealed housing as a significant concern:

The survey also found that transportation remains top of mind in metro Atlanta. When asked to name the biggest problem facing the region, 28% of respondents said transportation. This was the sixth straight year this topic topped the list of residents’ concerns.

Three ‘What’s Next ATL’ talks provided insights about where our region is today and where we’re headed.

Alicia Philipp, president of the Community Foundation for Greater Atlanta, talked about the need to change the way decisions are made to better reflect the region’s diversity.

“The future is not one voice, one language, one race or one gender,” she said. “We don’t all look the same, and the center of power should look like all of us, not just some of us.”

“Planning has been critical to our success,” he said. “Parcel by parcel, block by block, year after year, and in some cases, minute by minute – the dedication to a vision must be there, if you are serious about making change a reality.”

And Jasmine Crowe, founder and CEO of Atlanta-based non-profit Goodr, talked about her innovative approach to addressing hunger and food scarcity in the region.

“We have two problems that can solve each other: Why are we not using good food that goes to waste to end hunger? Hunger is not an issue of scarcity; it’s a matter of logistics,” she said.

ARC also announced the launch of season 2 of the What’s Next ATL podcast. This season’s five episodes focus on how to build the metro Atlanta communities we want, from big-picture forecasts for the region, to our jobs, to our neighborhoods and homes.

The host, ARC staffer (and former NPR reporter) Kate Sweeney talks with experts, local leaders, and residents — and makes it conversational along the way.

Each year, ARC’s Developments of Excellence awards honor developments and places in the 10-county metro region that are improving quality-of-life for residents.

The top Development of Excellence recognition for this year went to the Kendeda Building for Innovative Sustainable Design. This groundbreaking example of sustainability leadership was constructed to the Living Building Challenge 3.1 certification standard, the world’s most-rigorous building performance benchmark.

Watch the video below to learn more about the Kendeda Building 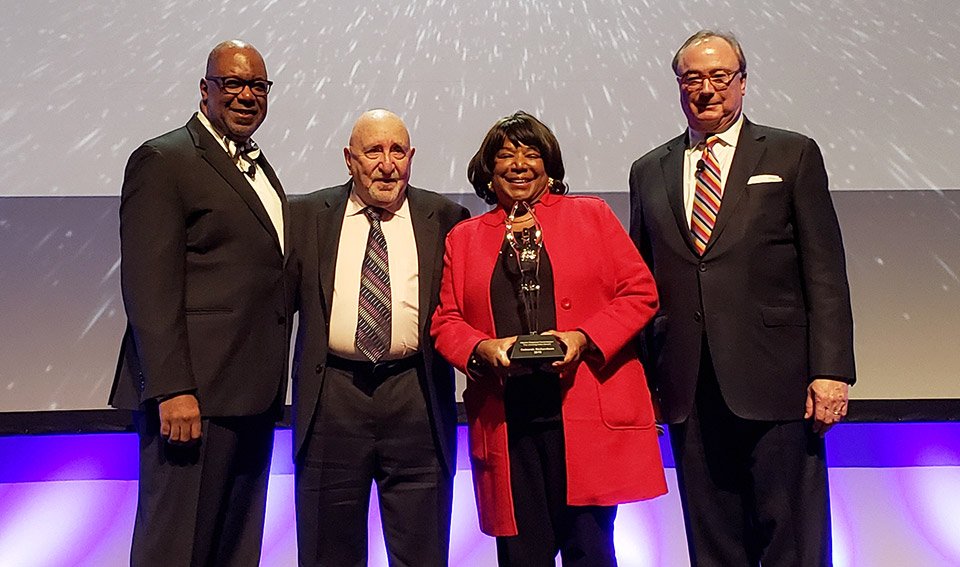 The Unsung Hero Award recognizes those heroes whose contributions often fly under the radar.

For the award’s third year, ARC honored Deborah Richardson, the Executive Director of the International Human Trafficking Institute at Atlanta’s Center for Civil and Human Rights. Richardson’s work on behalf of women and girls that have been victimized has led to legislation and the opening of multiple safe-houses and shelters. 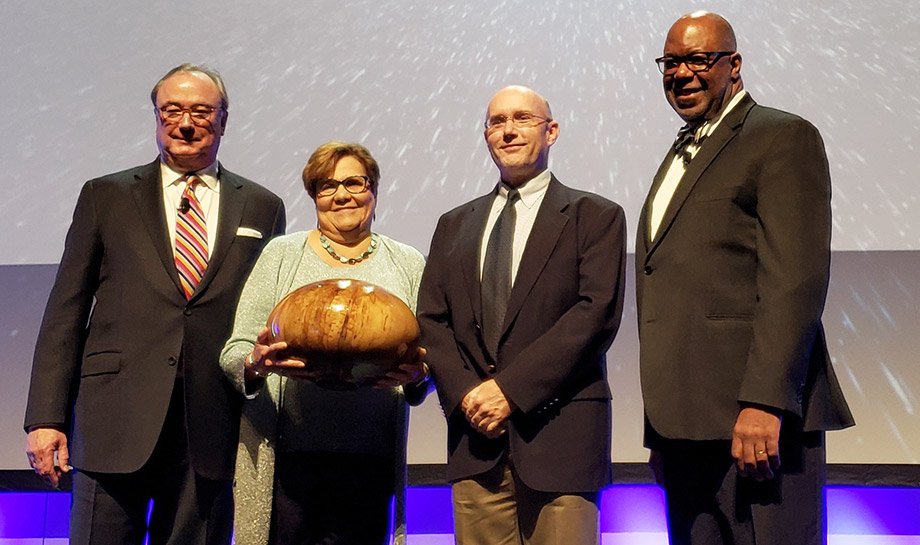 The sixth annual Harry West Visionary Leadership Award was given to Clara Axam for her integral role in Vision 2020 and continued leadership in metro Atlanta’s progress.

The Harry West Visionary Leadership Award honors the legacy of Harry West, ARC’s longest-serving executive director, who exemplified courageous and visionary leadership throughout his distinguished career. Each year, ARC presents this award to a leader who exhibits such a vision and passion for our region.

Axam’s work both before and after the Olympics have made an impact on affordable housing, education, and community revitalization in the city’s core. Her leadership on the board of MARTA and Atlanta BeltLine, Inc. helped guide the future of transportation planning for some of the region’s most ambitious projects.

Axam continues to be a leader in private practice, lending her expertise to organizations like ARC, the Community Foundation for Greater Atlanta, and United Way of Greater Atlanta.