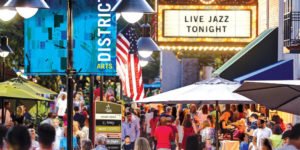 Been out for dinner and a show lately? You’re impacting the economy.

It turns out metro Atlanta residents spend between $23 and $48 every time they attend a local arts or culture event – and that’s beyond the price of admission to a performance or exhibition, according to a recent study.

Local businesses that cater to cultural audiences, such as restaurants, parking facilities, and even the neighborhood kid babysitting your children reap the rewards of this economic activity.

The nonprofit arts and culture sector alone is a $719.8 million industry in metro Atlanta that supports more than 23,000 full-time equivalent jobs and generates $65 million in local and state government revenue, the study found.

The economic impact of metro Atlanta’s arts & culture community was the subject of a Nov. 13 regional cultural forum, hosted by the Atlanta Regional Commission, Fulton County Arts and Culture, the City of Atlanta Office of Cultural Affairs, and the Community Foundation for Greater Atlanta.

The Forum on Arts and Economic Prosperity was moderated by Jay Dick, Senior Director of State and Local Government Affairs for Americans for the Arts, which produced the economic impact study.

Five Takeaways from the Forum

To broaden support for the arts, broaden people’s understanding of what “the arts” are
Be sure to include things as varied as neighborhood street festivals, PTSD treatment programs, visual art in rail and bus stations, and programs that curb the drop-out rate.

The arts are an industry, not a charity
“The arts are an employer, a driver of the economy, and a catalyst of growth,” said panelist Joan Compton, vice chair of the Fulton County Arts Council. In 2015, Atlanta-area spending on arts and culture topped $471 million. When talking with decision-makers, Compton said, advocates must keep their industry’s impact foremost in their minds—and support their claims with data.

When a community attracts cultural tourists, it harnesses significant economic rewards
Non-resident attendees spend more than twice per person than local attendees — $48 rather compared to $23. Travelers typically spend on lodging, meals, and transportation.

Artists: Get involved in your community
“You’re not a game-changer inside your museum, your theater, or your coffeeshop,” said panelist Ann-Carol Pence, co-founder of Lawrenceville’s Aurora Theatre. She recommends networking, early and often, with local business community and lawmakers. They can’t understand your story unless you share it.

“Ultimately, arts and culture feed everything,” said panelist J. Carter, founder of ONE Musicfest. “The more we can do to eliminate any cultural divides we may have and work together, the better.”

Art by the Numbers*

*Source: Arts and Prosperity Study 5, State and Local Government Affairs for Americans for the Arts