jobs and has an economic impact of more than $34 billion a year.

But the area around the airport, while home to several large corporate headquarters (Delta Air Lines, Chick-fil-A and Porsche Cars North America), has lagged behind the rest of the region economically and has developed without a cohesive strategy.

Consider that Aerotropolis Atlanta’s geographic area (160 square miles) is much larger than that of downtown Atlanta (1.9 square miles), but it is home to only twice as many jobs and includes a good deal of undeveloped land.

The opportunity for growth is substantial.

Recognizing the potential, business and civic leaders worked with the Atlanta Regional Commission (ARC) to launch the Aerotropolis Atlanta Alliance, a coalition of Fortune 500 companies, local businesses, governments and non-profits with the goal of transforming the airport area into a regional economic powerhouse.

Four things you need to know about the Aerotropolis Atlanta Blueprint:

The Blueprint assesses the strengths and weaknesses of the airport area and includes both a vision for advancing the Alliance’s priorities and a five-year plan for moving that vision forward.

Recognizes the airport as the heart of Aerotropolis Atlanta

The Blueprint focuses on first improving the area’s core by encouraging development at carefully targeted “catalytic sites” – such as a “Corporate Crescent” just north of Hartsfield-Jackson, already home to Delta and Porsche.

Strives to balance economic growth with improved quality of life

The Blueprint aims to create an attractive environment for investors, employees and residents. The plan calls for infrastructure improvements to create more walkable places across Aerotropolis Atlanta, as well as the creation of a “Green Corridor” of trails and sidewalks to tie together the area’s natural, historic and cultural resources. This corridor could potentially connect to existing trail networks in the region, such as the Atlanta BeltLine.

Seeks to improve the area’s image

The Blueprint lays out a plan for improving safety and, along with it, the perception of the area. Thanks to funding from the Aerotropolis Atlanta Community Improvement Districts, several “gateway” intersections are being improved, and additional patrol cars have been assigned to the area to enhance safety. 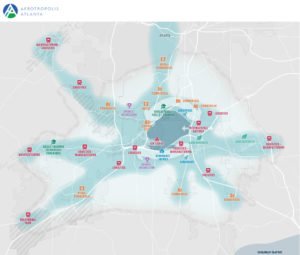 The map above shows different types of businesses and where they might be located in Aerotropolis Atlanta. The dark area is the airport. The arch across the top is the “Corporate Crescent. The arch across the bottom is “Cargo City.” The ring they create is the core that is critical to the Blueprint’s success.