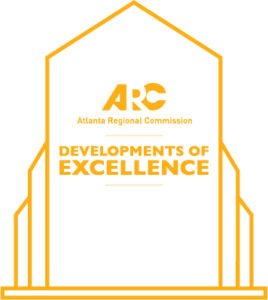 Developers, local governments, and other organizations are awarded Development of Excellence Awards for visionary planning and innovative design projects that make the 10-county Atlanta region a better place to live, work, and play.

Check out the video featuring the winning projects and read more about the winners below.

The 2020 Development of Excellence Awards winners were announced at the ARC State of the Region Breakfast on November 13, 2020.

The North Point Placemaking Plan won in the Visionary Planning category, which honors state-of-the-art planning initiatives that will achieve lasting progress in the community. The plan aims to transform a six-hundred-acre area between GA-400 and Big Creek Greenway from an auto-dominated environment into a walkable, mixed-use district.

This category recognizes a cutting-edge development that contributes to the region’s advancement and supports the goals and policies of the Atlanta Region’s Plan. The winning Adamsville Place development fills an important need in south Fulton County, providing 300 affordable housing units, a health center, and a charter school, all serviced by an onsite MARTA bus stop.

The Great Place category was awarded to the Powder Springs LCI Implementation: Town Green and Historic Building Renovations. This award recognizes an inspiring space that enhances a community’s character and provides options for housing, employment, or recreation. The City of Powder Springs utilized an LCI implementation grant to renovate and expand its Town Green to more than double its size. The project also includes the rehabilitation of three nearby buildings for new restaurant and retail uses.

Livable Center recognizes a targeted project that significantly advances the implementation of a community’s Livable Centers Initiative plan. Built on a former parking lot at the Avondale MARTA station, Decatur East transforms the concrete lot into a bustling mixed-use, Transit-Oriented Development with an affordable housing component.

The Park at Highway 29 Ballfields began as an idea for developing an urban park project that would catalyze revitalization in Union City. The project included the renovation of an athletic field, extensive landscaping, and development of an amenities area. Redevelopment of the park led to the construction of a community center, resulting in a sense of place for Union City and a safe place for kids to play and residents to socialize.

2007 Development of Excellence Award
West Village, Presented to the Pacific Group, Inc., Branch Properties of Atlanta, and the Highlands Companies of Alpharetta

2006 Development of Excellence Award
Woodstock Downtown, Presented to Hedgewood Properties and the City of Woodstock

2001 Development of Excellence Award
Old Suwanee, Presented to Richport Properties and the City of Suwanee

Nominations are no longer being accepted for 2020.