Posted in: About ARC Community Development

UASI: Preparing for a Secure Region 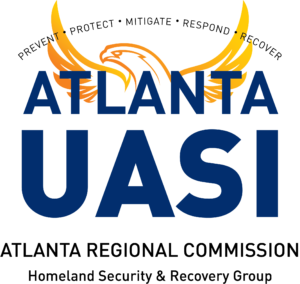 UASI, the Atlanta Urban Area Security Initiative, aims to provide a secure, prepared, and resilient Atlanta region by continuing to develop all-hazard planning and response capabilities that enable a safe and secure urban area for all residents and visitors.

UASI was designed to provide enhanced federal preparedness funding to high-threat, high-density urban areas that were identified as vital to the nation’s economy and national security, if disrupted by a terrorist attack. Our focus is to manage the Atlanta UASI in partnership with jurisdictions in the UASI footprint. Those jurisdictions are: City of Atlanta, and Clayton, Cobb, DeKalb, Fulton, and Gwinnett counties.

UASI was created in the aftermath of the September 11, 2001 attacks as one of the anti-terrorism programs authorized by the Homeland Security Act. UASI is designed to provide enhanced federal preparedness funding to specific cities that were identified as vital to the nation’s economy and national security, and to encourage regional cooperation in emergency preparedness and response. The City of Atlanta and its surrounding metro area is considered highly vulnerable, with the potential for major impact on the economy and nation should it be attacked and its infrastructure significantly damaged. 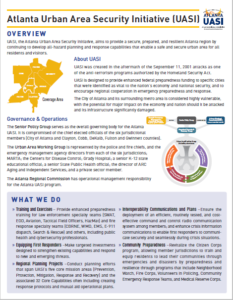 Interoperability Communications and Plans – Ensure the deployment of an efficient, routinely tested, and cost-effective command and control radio communication system among members; and enhance crisis information communications to enable first responders to communicate securely and seamlessly during crisis situations.

Community Preparedness – Revitalize the Citizen Corps program, allowing member jurisdictions to train and equip residents to lead their communities through emergencies and disasters by preparedness and resilience through programs that include Neighborhood Watch, Fire Corps, Volunteers in Policing, Community Emergency Response Teams, and Medical Reserve Corps.

The Senior Policy Group serves as the overall governing body for the Atlanta UASI. It is compromised of the chief elected officials of the six jurisdictional members (City of Atlanta and Clayton, Cobb, DeKalb, Fulton and Gwinnett counties). The Urban Area Working Group is represented by the policy and fire chiefs, and the emergency management agency directors from each of the six jurisdictions; MARTA; the Centers for Disease Control; Grady Hospital; a senior K-12 state educational official; a senior State Public Health official; the director of ARC Aging and Independent Services; and a private sector member. The Atlanta Regional Commission has operational management responsibility for the Atlanta UASI program. 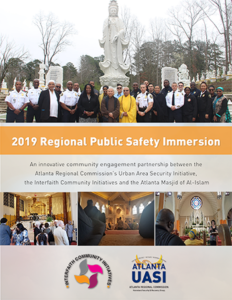 The Atlanta UASI 2019 Public Safety Immersion booklet summarizes the shared experiences between leaders of diverse communities and the region’s public safety community to better engage with the citizens they serve. This colorful booklet describes how fostering trust between law enforcement and communities of faith can build bridges to lasting relationships, while helping to prevent bias-based confrontations. Included in the booklet is a resource page with links for further study, and the project’s Final Report.