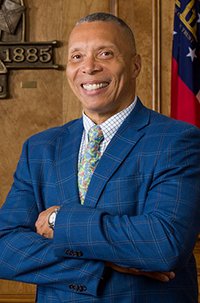 Mr. Clemons serves as the Cobb County mayoral representative on the ARC Board. He is also a member of the Community Resources Committee.

Mr. Clemons serves as the Cobb County mayoral representative on the ARC Board. He is also a member of the Community Resources Committee.

Before being elected mayor in 2018, Mayor Clemons was elected the first African American Councilman of Austell’s At Large Post 1 in 2013. He has also served Austell  on the Variance Board, the Austell Community Collaborative (ACC), Austell Community Improvement Commission, as Vice President of the Planning and Zoning Board, and as Mayor Pro tem.

Mayor Clemons attended Georgia State University and then worked in progressively responsible positions at the US Postal Service. He first served as a mail carrier, then in Human Resources, and finally as a Sales Executive, earning 33 years of awards, acknowledgements, and promotions.

Mayor Clemons is a proud husband, father of five, and grandfather of five. He is extremely active in his church. He serves as Head Elder; President of the 501(c)3 non-profit board for the Berean Outreach Ministry Center; and Chairman of the Board of Directors for Berean Village, a senior retirement community. He has also been appointed chairman of The Lay Advisory Council of the South Atlantic Conference of Seventh Day Adventists.