The survey, which began in 2013, is the largest of its kind in the Atlanta region. It offers a snapshot of residents’ views on a range of critical issues such as transportation, the economy, education, aging, and neighborhood quality of life. In 2020, Metro Atlanta Speaks covers a 10-county region and is statistically significant to the county level, as well as for the City of Atlanta.

The 2020 survey offered some fresh insights on the stark effects of the COVID-19 pandemic, as well as insights into the state of race relations in metro Atlanta—a topic that drew heightened attention during this year’s demonstrations.

The Pandemic’s Acute Impact on Employment

This year’s survey also shed light on the state of race relations in metro Atlanta, a topic that drew heightened attention during the summer’s demonstrations. 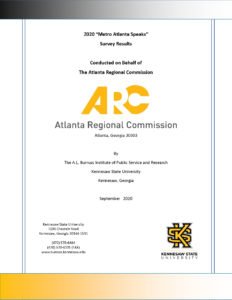 The 2020 survey, conducted by Kennesaw State University’s A.L. Burruss Institute of Public Service and Research, asked questions of 4,400 people across 10 counties about key quality-of-life issues.  Survey results are statistically valid for each of those 10 counties and the city of Atlanta, with a margin of error of plus or minus 1.5% for the 10-county region as a whole and plus or minus 3.8% to 5% for the individual jurisdictions.