About the Atlanta Region 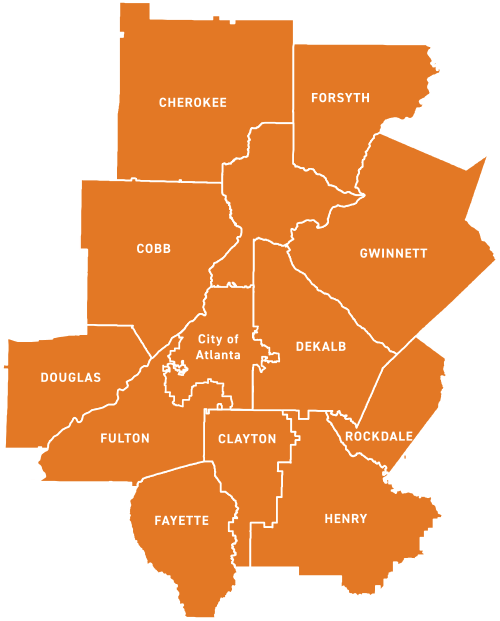 From its humble beginnings as a railroad terminus, metro Atlanta has grown to become one of the nation’s largest, most dynamic regions – and a major player on the global stage. The region is growing fast, with a population that is rapidly diversifying.

This vibrant region is the economic capital of the Southeast and boasts world-class universities, the world’s most-traveled airport and a lively arts and culture scene. Metro Atlanta is also known for its warm hospitality, temperate climate and vast tree canopy – it’s a region in a forest.

Metro Atlanta added 64,940 people in the past year, bringing the 11-county region's total population to 5.1 million, according to the 2021-2022 population estimates released this year.

According to ARC's population forecasts, the 21-county region will add more than 2.9 million people by 2050, bringing the population to 8.6 million.

The region’s older adult population is growing rapidly as people live longer and the Baby Boom generation ages. By 2050, ARC forecasts the number of residents that are age 75 and over will grow to 12%, totaling just over 1 million people.

At the same time, the Atlanta region is becoming increasingly diverse. A majority of the population – nearly 70 percent – is now made up of racial and ethnic minority groups, a figure that is expected to increase over time.

Some ARC planning covers a 21-county region. Our agency developed an interactive dashboard covering the 21 counties and provides information on population and employment to health and education.

The region is home to a number of Fortune 500 companies and other large employers, such as Delta Air Lines, Coca-Cola, Home Depot, UPS, AT&T, and the Centers for Disease Control.

The Atlanta region is expected to add more than 1.2 million jobs by 2050. The top employment sectors in 2050 will be health care, retail, education and professional and scientific.

Each year, ARC and its community partners conduct the Metro Atlanta Speaks public opinion survey to take the pulse of metro Atlanta residents and help guide the region’s planning and decision-making.

The survey, which began in 2013, is the largest of its kind the Atlanta region. It offers a snapshot of residents’ views on a range of critical issues, such as transportation, the economy, education, aging and neighborhood quality of life.

Metro Atlanta Speaks covers a 13-county region and is statistically significant to the county level, as well as for the City of Atlanta.